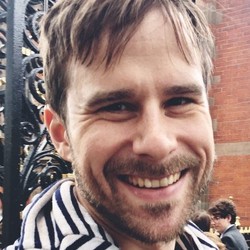 Marton Ribray is a member of the Hub and a Leverhulme Early Career Research Fellow at the School of Law of the University of Surrey.

His project is entitled “Computational modelling of law - From ancient Roman texts to sustainable legal AI innovation”. The project focuses on the concept of “ownership” in the Justinianic corpus of Roman law (533 CE) with test samples drawn from Rabbinic law of the same period. Experimenting with computational methods within laboratory conditions provided by closed historical corpora will identify methodological and technological obstacles hindering the computational modelling of open modern legal systems. The project is the first to model the document-, conceptual- and rule structure of a legal domain in a systematic and integrated manner by experimenting with XML-based modelling methods endorsed by the OASIS consortium. The project is also the first to apply such methods to historical legal data. The project is expected to contribute to the understaing of “ownership” in Roman law, in Civilian and common law systems. The project is also expected to contribute to the development of sustainable AI tools based on semantically overloaded texts by searching an adequate coupling of rule-based and statistical (Machine Learning) methods. As part of the project, Marton is a visiting researcher at the Alan Turing Institue where he works with Dr Barbara McGillivray (The Turing/Cambridge) on lexical semantic change of the concept of “ownership” by using Natural Language Processing methods.

Marton received an MA in Library and Information Studies from UCL in October 2019 with a thesis written on “Computational modelling of law in three cascading layers: OASIS standards applied to a text sample from ancient Rabbinic law”. He received his PhD from the University of Manchester in March 2018. His doctoral research focused on the development of abstraction and scientific language in Rabbinic and Roman law. Marton’s comparative approach to ancient legal texts encouraged to revisit the assumption of cultural interchange between Rabbinic and Roman cultures, and generated insights about their compositional and conceptual structure from the perspective of mutual isolation, ignorance and indifference. Marton has a background in Philosophy, Classics and Hebrew (MA, Budapest) and the history of Second Temple and Rabbinic Judaism and early Christianity (MPhil, Oxford). He studied Hebrew and Talmud in Jerusalem, and taught Talmud for four years at Leo Baeck College, London’s Progressive Rabbinical Seminary.

Our submission for the Financial Times Legal Challenge Hackathon